On Wednesday I had the chance to visit a beach that I havn't been to in almost a decade! As a kid, my grandpa use to take my little sister, my eldest cousin and I out for a day at the beach. I hadn't realized that I had came back to this very beach because of all the changes that has happened over the years. It was throughout this event that I was having a blast dancing to the cha-cha slide and throw back songs, drawing my own hopscotch layout for the kids, fish printing and throwing around the giant beach ball (all while being as responsible as possible)! 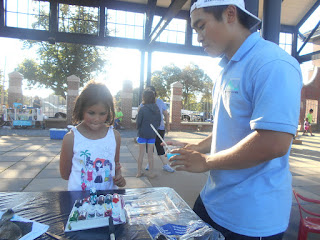 I would say everyday with Save the Harbor/ Save the Bay was a highlight of my summer so far, however that particular Wednesday was definitely in the top ranks! It may or may not have been due to the fact that I had a lot of blueberry and watermelon slush that day! 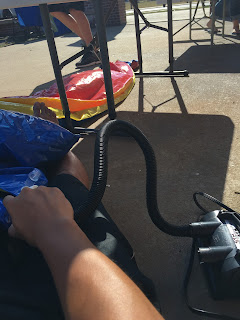 Here's a picture of how big the beach ball is compared to my foot! This monstrous beach ball was not even at full sized yet when I took a picture with it. After a few minutes of incorrectly using the electric air pump, it was thanks to Preston's observation skills that I needed to adjust the pump. Shout outs to this guy for playing a huge role in making sure the kids that day had a colossal beach ball to play with! It took the collaborative effort of Joe, Edward and myself to transport this thing from the Pavilion area to the sandy beach. 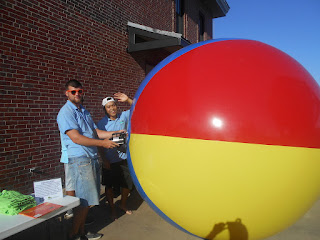