Hey guys,
Something very exciting happened today at Piers Park. Well it was exciting but it was also gross. Unfortunately Sean was not here to witness this, but when we went down to the dock in the morning it was very low tide. I did not want to sit on the dock in the hot sun so I decided to take some kids on a kayak. We started going toward the rocks because I wanted to see if we could find anything interesting like starfish or something. We did not find starfish but as I was leaning over to look over for some starfish, I hear one of the kids say "Hey lets go over there near that fish!" I immediately was interested so I started paddling us over there when all of a sudden, a gross smell hits us. As we slowly paddle closer and closer to the fish we see the pretty big dead fish floating in the water. I thought "Hey we are not far from the dock, lets go bring it to show the rest of the kids and staff". I tried to pick it up out of the water but the second I pulled it out of water the grossest smell smacked me right in the face, so I kept it in the water and told the kids to paddle us towards the dock. 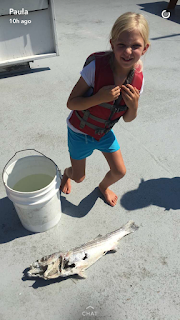 As we started paddling away I noticed that there was a paddle in the water and asked which of the kids had dropped it. A girl named Angela exclaimed that she did not even realize that she dropped her paddle in the water. The kids struggled to try to steer us towards the paddle without my help, and I could help cause I was busy holding onto a disgusting dead fish. However we were able to get the paddle and we paddled back to the dock. I told Ray about the fish and he passed me a bucket to put it in. I think Clara's reaction to the fish really describes it all. It was half eaten and decomposing and it just so happened to wash up on the rocks. Lucky for us, Kent was kind enough to cut up the smelly fish for us. We used as much as Kent could salvage for bait but ended up throwing the carcass back into the water for the Seagulls. #DeadFish #LowTide #PiersPark
Til next time,
Amanda