Hey everyone its Jahari here again. So since the beginning of this week I was switched from the Children's Museum to work at All Access. Mind you I have never chosen to work at any other sights because I was pretty comfortable working at the Children's Museum. So not everything we were going to be doing was going to be new to me, but just the feel of the environment was going to be new. So me and my coworkers that I don't usually work with got on a really big boat with a whole bunch of kids and went to this island called Spectacle Island. When we first got there, there was a dock that led to the island. I chose to stay on the dock and fish with three of my coworkers while another three chose to play sports. I've been at Spectacle for two days now and I love it mainly because we are more likely to catch fish. Plus the island looks really nice and the wind is always nice and breezy. While at Children's Museum, we don't catch a lot of fish and its almost always blazing hot so I'm really enjoying the change. 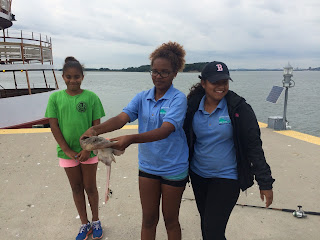 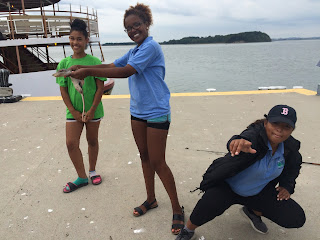