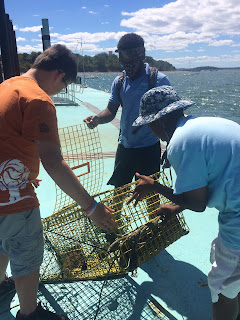 I spent my first day at Camp Harbor View on Monday. It was  to be at another site other than Carson for a day. I met so many people. Some of them being close friends relatives, such as little brothers and sisters. Some of them whom I haven't seen since they were about six or seven. Seeing them now, they were about 13-15. And it brought back so many memories of them being so little and tiny. On top of the familiar faces, I had a chance to meet a bunch of new people as well. I had a chance to meet the fishing club as well. They are total pros when it comes to fishing and they are all so young. One kid even caught a Skate! 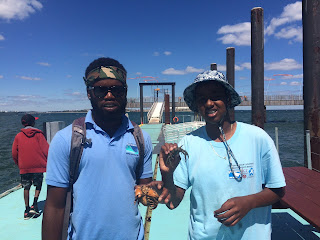 While kids were fishing, I took Abel down to open up one of our crab traps. There were about six crabs in all. We put the crabs on the table so we could put the trap back into the water, and all of the crabs took off! They were running down to the other end of the table. If you were just looking on, it looked like we started a crab race. Here's a picture of Abel and I hold the proclaimed winners. Although it was my first time here at CHV, I had an amazing experience! From the new faces and old ones, to the epic crab race. I had a great day at CHV. Until next time CHV, keep on exploring, Preston.
at 2:54 PM