Monday mornings are usually so boring and annoying but this one was different. I was back at courageous sailing center for the second time, this time I didn't get lost. That morning I was determined to catch anything so I partnered up with two campers to teach them how to fish. They were about 12 and 13 years old and taller than me, but who isn't? Anyway we ran out of bait that morning and so we used hot dogs but the girls and I knew we wouldn't catch anything so they wanted to check out the crab traps on the dock. We put our life jackets on and head down. The traps had been there for years so they were a struggle to pull up. We weren't just pulling the trap, we were pulling mud, sea squirts, and seaweed. There were so many crabs and we caught two baby spider crabs. Super cute. Further down there was an even older lobster trap. You could tell it's old by the rope that was crusty and dirty. It took more than 3 people to pull it up. Andrea and I tried pulling it up ourselves but we couldn't so we gathered as much people as we could to help. Eventually the entire camp got involved. 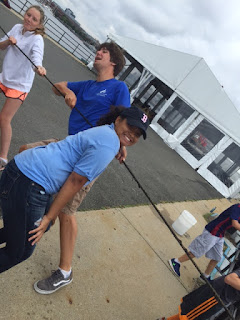 It went downhill from there. We tied another rope to the rope that was attached to the trap and pulled. We threw it over the railing where the campers were, everyone grabbed on and pulled and pulled and pulled until... *SNAP*. The line broke! Luckily one of the counselors caught it before it went all the way into the water. We re-attach the ropes and pull harder and *SNAP* and with that it was gone forever. The team effort put into it was wonderful and we were all so sad we didn't get to see what was inside the trap, if there was anything. It was one of the most exciting moments at courageous.