final week and as well as the final days for Sean and Amanda If the title didn't hint that already but in those 2 days I've had a bunch of fun as well as how much my body aches from those 2 days alone. First Sean's final day the most eventful thing in that day was around the end where amanda,Sean, and Christian jumped off the dock with Sean giving the 10/10 dive into the water. Afterwards sean gave us a ride back to the station and we said our goodbyes to him. Now let's move onto Amanda's final day. first beginning in the morning at the dock of piers park in one peaceful morning comes a huge dead fish being dragged in by Amanda in a kayak smelling like it was piles of manure but nonetheless we decided to cut parts of it off for the crab traps and fish traps, here's a pic of amanda pulling the thing in. 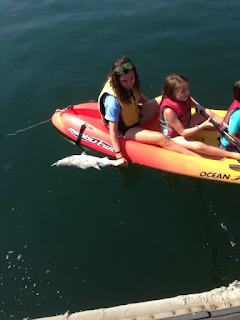 After cutting and almost puking a few thousand times, the traps were ready and by the end of the day we had crabs crawling on crabs crawling on more crabs as the traps were full, but after all of us smelling like the deceased fish we all said our goodbyes to amanda and while a few stayed for the luau I left to return to my home to shred through 6 bars of soap to get rid of the smell.
at 8:29 PM