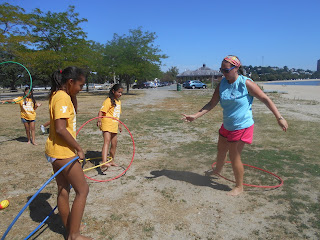 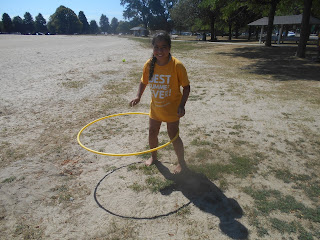 Hey guys! Today at Carson, we had a group from the East Boston YMCA hang out with us. We were super excited to have such a big group for us to learn and interact with. On a hot day like this, they decided to park themselves under some trees further down the beach. Well, easy solution! We brought down our toys and tricks to them! While most of the boys took to sports and sand castle building and destroying, we hung out with some of the girls who were interested in our hula hoops. Some of the girls were absolutely amazing with the hoops!


I candidly admitted that although I'm not your average hula-hooper, I was definitely a rock star with the ankle-hooping. I decided to first show off, and then show while teaching them how to hula around their ankles and jump over it. They loved learning this new way, and by the end of the session, one of the girls could bring it from her neck to her hips and to her ankles. Seeing her proud smile while I high-rived her success was an amazing feeling. 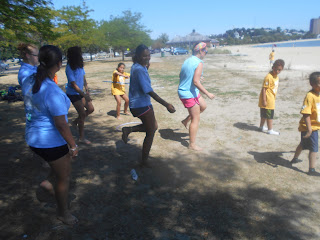 We also decided to put on some dance classics. Sedny and Nieomi were on song duty: Macarena, Cotton-Eyed Joe, Cupid Shuffle and Cha Cha Slide were a few of the dances we participated in with our new friends. While one of the boys stared at us like we were crazy, as did the drivers behind the cars passing us by, having laughs and fun with some of the children was priceless and completely worth it. It's been getting quiet on the beach as the summer nears to an end, so it was refreshing to be working with such a large group for the day. I had a ton of fun with them, and they even invited us to their talent show tomorrow (where many of them will be showing off their new and improved hula hoop skills, they say). It was a great day at the beach, and it feels good to say it! 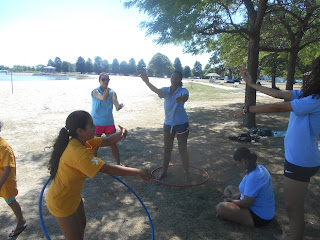 Hope your Thursday was just as good, Bridget
at 4:15 PM