This summer we've caught a ton of interesting ocean critters at Piers Park. Inside our traps we've caught various types of crabs, like rock crabs and spider crabs, and also a few different species of fish! This week we found a small flounder and a little striped bass. The Harbor Explorers loved observing these animals and learned a lot from them, but the highlight of this week was what we caught on a fishing rod: a squid, which the kids decided to name Inky, and for good reason.

It was a historic moment at Piers Park when a Harbor Explorer named Joe pulled up the first catch on a fishing rod this summer, and the first thing that everyone noticed was the massive store of ink that this squid was carrying. He didn't squirt any initially, but we could clearly see the dark fluid splashing around inside of Inky as we transferred him into a touch tank. As we got closer to his temporary enclosure, he began to spray campers and counselors with jets of clear fluid. Some of the kids were disgusted by Inky's actions, and others were in awe of the defense mechanism that they had just witnessed. This was the first of a few similar strategies that we watched this squid perform. 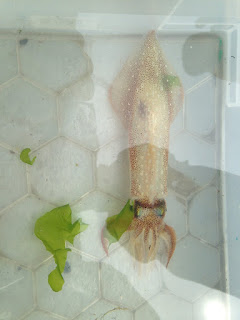 Once we unhooked Inky and placed him into fresh water, he torpedoed around the circular bucket with strong tentacle thrusts, spraying ink the entire time. After he settled down, the kids began to gently touch the squid and experiment with his ink. It looked like a liquid as it was dispersed and eventually settled into the water, but after further Harbor Explorer evaluation, we discovered that it was a web-like, stringy substance. The children were amazed as they held the mysterious thing in their hands, which I discovered after some research, is edible! 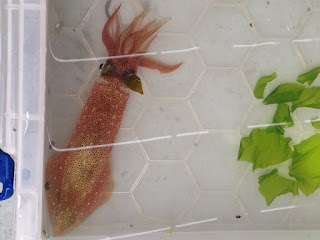 Later, we witnessed another defense mechanism first-hand. When Inky was relaxing at the bottom of the tank, he was a red color, with a beautiful and intricate pattern along his back, but when he swam around and rose off of the bucket's bottom, he changed his hue and became completely clear. We concluded that this was a camouflage technique, and similarly to the flounders that we caught, when this animal was near the dark ocean floor he would blend in brilliantly in his reddish tone. If he was swimming off of the ground in the transparent water, then he would become clear to become invisible. Amazing! It's so easy and fun to learn when the material is as cool and blatant as ours is on the Boston Harbor.

I especially like this picture. Can you spot Inky!? 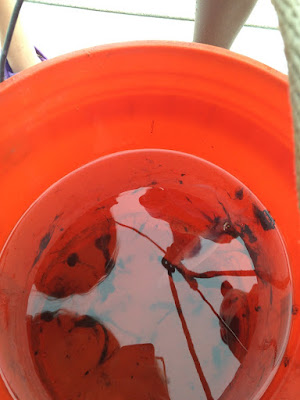