Hi everyone,
So last Monday at Courageous, instead of Grace, we had Kristen join us there for the day. Kristen had no idea of how things at Courageous works because it's a little different from other sites. Every Monday we get a new group of kids. So last Monday when Kristen joined us, she thought we had bait. With that being said, we had no bait to start off the morning with some fishing like usual. As Kristen ran to Tedeschi to grab some bait, Kharlyiah approached me with two girls that wanted to go down the dock to pull up multiple lobster traps that we have there. The four of us put on our life jacket and walked down the ramp to the dock. When we pulled up three of the old traps, one of the girls pointed out a fourth trap that none of us knew existed. Apparently, that fourth lobster trap had not been pulled in atleast two years so now this is when the challenge begins. 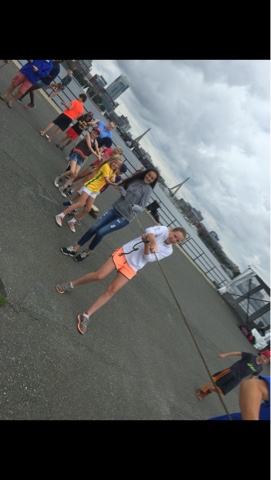 I was not dressed comfortably for that challenge but I did not care. All I worried about was trying to pull up that trap because we were all anxious to see what was in it. When I tried pulling it up alone, I just couldn't because it was extremely heavy. All of the girls decided to help and it still would not come up so we thought it was getting stuck under dock. We kept trying and trying and trying and did not give up. Some of the staffs from Courageous tried helping us and they gave up. Instead of me giving up I came up with an idea of tying a rope. The staffs from Courageous ran to get a rope so Kristen came down the dock and tied the rope to the lobster trap's rope. Now this is when we put all of the kids at work. We threw the rope up across the pier and had atleast 15 people pulling the trap from up there. They were able to pull up most of it but the rope from the lobster trap snapped. Luckily, myself and a staff from Courageous who was still down the dock, were able to save the trap from sinking. Now this is where it gets more challenging. The two of us are holding on to a little bit of rope trying to save the really heavy lobster trap but all you could hear was me screamming for my fingers that was getting scraped off and yelling for some guy staffs to comw help us out because I couldn't hold on to the rope anymore. A guy staff from Courageous came down and tried tying the rope they had to the little bit of rope on the lobster trap that was left and I dont know how he did it but he just did it. So we threw the rope up and across the pier again and had the kids, Sam and Courageous staffs pull it up one more time and that's when the old lobster rope snapped again. This time we were out of luck in saving the trap becausw there really was no rope left to grab. The lobster trap sunk after 45 minutes of trying to pull it up and that's when we all gave up. I could not thank the kids and their staffs enough for the challenge. This was the most fun and productive day we ever had at Courageous. 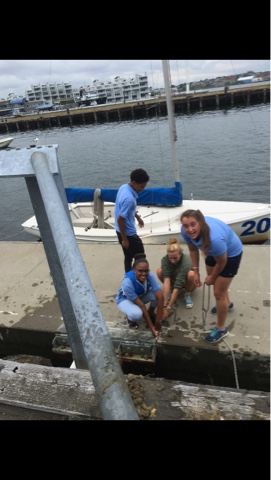