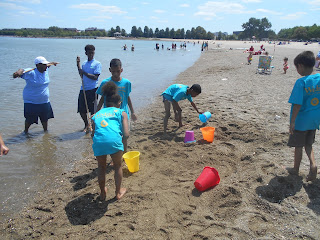 It was another great day at Carson on Monday. Between our hula hoop contest, and the kids trying to build the biggest sand castle, it was a close call for highlight of the day. Many of the kids from this program had never built a sand castle before! And for a few of the foreign kids it was their first time on of of Boston's beaches. It was a day of many first's at the beach. These kids were in the middle of constructing "the biggest sand castle ever" as one of the kids called it. They were determined to make it bigger than themselves, until it was time for them to go to lunch. But the fun didn't stop at launch time. After the kids stuffed their faces with pb&j sandwiches, the kids were back on the beach. This time they started a hula hoop contest. Personally, my hula hooping skills are sub par at best. But some of these kids would still be twirling the hula hoop on their waist if their camp didn't have to leave. It was fun seeing little kids between six and eight, hula hoop better than the staff. Both of these girls, Sasha and Tonya, were named the best hula 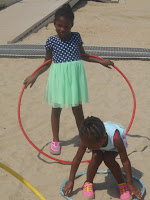 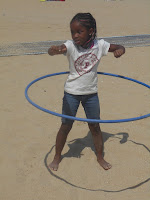 hoopers in their camp. They both kept the hoop spinning for about two minutes! I can't even keep the hoop up for fifteen seconds. These two girls kept going and even when it was time for them to leave they still wanted to stay and hula hoop more. Guess I need to brush up on my hula hoop skills. Until next time, keep saving the harbor, Preston.