At the Boston Children's Museum, we had been experiencing a bit of a fishing drought. On Monday morning, at the beginning of the week, it had been a week and a half since we had caught a fish. The expectation that the next cast would be the lucky one was as high as ever. Eager kids kept stopping by, hoping that they would be the lucky one. We set the crab trap around 10 AM in order to fill up our crab touch tank for visitors. About 30 minutes later, I walked over to see if we had caught anything. While there was one or two crabs, there was also a fish! While our intentions with the trap were not to catch fish, we were thrilled to have caught the first one in a week and a half! After a scan through our Atlantic Coast guide book, we still could not figure out what the little guy was. Many passerby's offered their opinion, but we could not seem to come to an answer. After a a quick message to our boss, he informed us that it was probably a croggie. 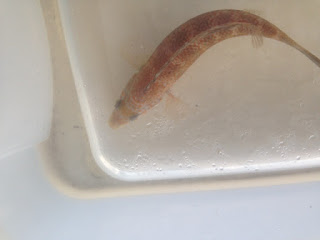 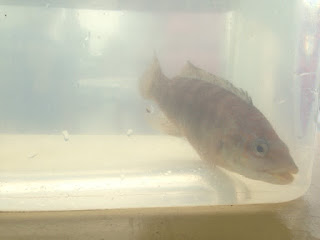 We kept our little friend in our touch tank throughout the morning (although there was no actual touching, the fish had a spiky spine!). Kids were thrilled to see not only our crabs, but also our fish, and most couldn't believe that we had caught him right here in the Fort Point Channel.