Meal from the Sea

This week on tuesday (July 25, 2017) I had the chance to go fishing with the staff stationed at Camp Harbor View (CHV) and their fishing club! Waking up bright and early at 6 AM, I was rushing to make it into the office in time at 7:45 AM. Once the preparations from our end was complete, we headed over to the dock to greet Charlie and Sam who would be driving the Save the Harbor staff and 7 members of the CHV fishing club out into the Boston Harbor! On board we saw this huge box filled with juicy plump sea worms! Everyone each had a rod to use during this trip. The moment Charlie gave the clear to drop our lines, you could hear a string of splashing water as sinkers and hooks flew into the harbor.

It was in this first hour that Captain Charlie snagged his first fish! Captain Charlie's rod was bent as he was furiously reeling what seemed to be a massive fish! When he finally got it up, it was a true beauty: a sea bass that was easily 16 inches! This fish had some very nice coloring to it! From head to tail, there were blends of black, blue, green and teal, making the fish look astounding. The trip concluded with me being able to take it home!

After a quick nap, I immediately started gutting the sea bass and de-scaling it! This was my first time doing it, and I had watched videos on techniques to use, so I was fairly confident that I could get it done! 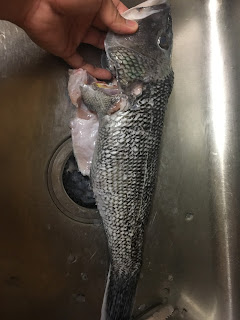 After a whole half hour ordeal, I had managed to gut and de-scale the fish!

With the utensils that I had at hand, I had to work slow since my knives weren't the most suitable equipment! 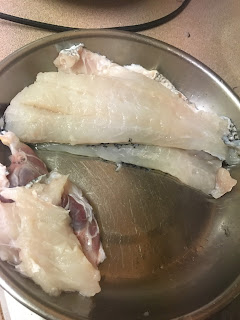 Above are the two fillets that I got off the fish and some worthy scraps as well!

After feeling accomplished with the quality of the fillets that I got off the fish, I began cooking! I looked around the cabinets at home and pulled together some ingredients: garlic, chicken powder, sea salt, black pepper, butter, lemons, and potato flour! Using an egg to bind the fish with the seasoned potato flour, I turned my wok on medium-high heat to work the butter and garlic to add flavor and fry the fillet! In minutes I achieved this delectable beauty that put me to sleep with a satisfied belly. 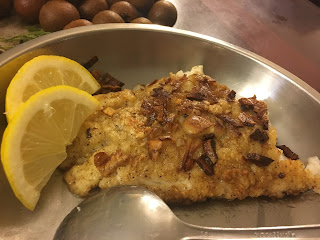 By 11:00PM I had managed to work some magic to make some fried fish for a night snack!

If you liked this bit on cooking, leave a comment! I'll definitely try to share any more sea food meals using things caught from the Boston Harbor.