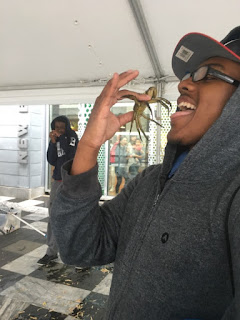 I recently got moved to the Children's Museum to work on Monday. On Monday unfortunately it was raining so I couldn't really feel the full force of my job. Such a bummer! However we did catch some crabs that people got to see and kids got to touch.
The next day it had rained but not as bad as the day before and it had cleared up later. On that day we have caught times 3 more crabs than I ever had caught at Piers Park. Such a crazy amount and I even heard that last week they had caught over 80 crabs!? Unbelievable in my opinion. 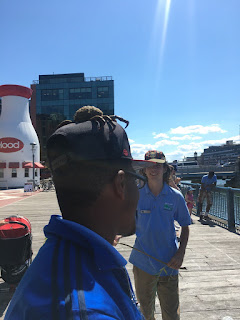 More and more people had started to come around once the weather started to clear up.  Overall it was fun and entertaining to see kids overcoming boundaries to touch the crabs and try out fishing. I had also learned how to tie a hook on a fishing rod. At this point in time it was a really lucky for me to learn that with all the messed up finding rods that I've encountered. Its a nice skill to have. We basically did the usual activities of catching crabs showing it off to people and fishing along with playing other games and activities with us.
Today came through (also known as Wednesday) and  it was pretty much the same as Tuesday only it was way more people especially in the morning. Alot of people wanted to try fishing and we even caught a spider crab. I even got it to stay on my head for a while. In the total of the 3 days we have caught over 70 or so crabs. Which is insane to me! For the three days I really had a good time at the children's museum and over all the job is self explanatory and relaxing for the most part.
Keep Smiling and Keep Moving
~Kamal
at 6:30 AM