Splashing into the New Week 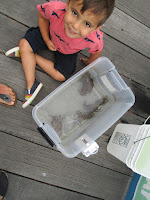 Most people complain about Mondays, I, on the other hand, love them. Mondays at the Children's Museum never disappoint. This Monday I got to meet so many kids who really took an interest in fishing and the harbor. While we were fishing somebody's napkin flew into the water and the kid I was fishing with just wouldn't let it go. His eyes got all watery and he kept trying to make me go in the water to get the napkin! Instead we compromised and I used a fishing rod to pull the napkin out of the water. After his environmental duties were done he decided it was time for him to move on to bigger and better things; like the inside of the museum.
While some kids are interested in fishing, crabs and saving the planet, others have other important things they need to do. A young girl named Maya felt it was exceptionally important that she stick her hand in our touch tank to play with the water. Luckily, the crabs weren't too upset but I knew if she did it again, they would be! So, Maya and I went and found the bucket of fresh water we had just pulled up, that had no creatures in it, and we played with the water! She was splashing her mom and I and laughing so hard when she did! When anybody else came over to put their hands in the bucket she gave them the dirtiest look! It was actually pretty adorable. She wouldn't leave until we dumped the water out and there
was nothing left for her to play with.
The lesson of the day was not in crabbing or fishing but in sewerage! My new friend Dylan and I decided to draw with some chalk to add to the "ocean" we had been building throughout the day. Dylan, unprompted, drew a picture of a toilet so I asked him "Where do you think the stuff you flush goes to?" and he said "I don't know, the ocean?". I saw an opportunity to teach him about something so I took it. We drew a small diagram of how what we flush gets to Deer Island and gets processed. He was so surprised to learn his waste wasn't just dropped into the water but was processed into something reusable and clean.
Keep Saving the Environment!
Sam