In summary of another fabulous week, the key things to highlight are the Wollaston Beach event,  the growth in marine species at the site and last but not least the awesome things the harbor explorers did!

On Thursday niight, DCR had a beach event in a park on the side of Wollaston Beach! The locals that have lived in Quincy have told me that Wollaston Beach is nicknamed the "Wolly."  I've heard stories about folks who grew up in the area who hated sea food but with one exception, whole belly fried clams! So after giving that dish a try, I can personally say "it's not bad!" I was half expecting it to be sandy and gross, but it wasn't bad at all! With the clam bellies in tact, you get this distinct clam flavor  that you don't usually get just clam strips! There definitely was still some grit with every chew, but it added to the texture experience! Throughout the event youngsters came out from all entrances of the park! Many came and had their first fish printing experience, or jump roped/ boogied to the buff DJ's mix! I had the chance to see Patrice, Kamal, and Jayden sweep up some of the kids to a dancing frenzy! By the end of the event, the sidewalks where tattoed with fish, signatures and random pictures made from chalk! Some of the elderly stopped by to ask if this event was a birthday party, or if we rented out the space, which it wasn't and we didn't! If you guys and gals see a beach event with a save the harbor/ save the bay banner, definitely come by and hang out with us! These events are for the public to enjoy the beautiful beaches that we are so lucky to have! 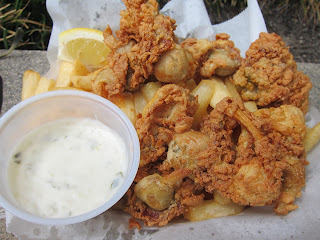 Above is a photo of what I had enjoyed at Wollaston Beach: Whole Belly Fried Clams 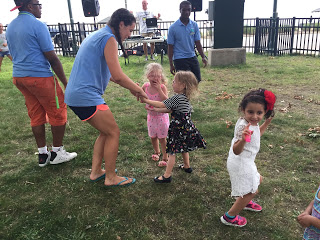 In this photo you can see Patrice, Jayden and Kamal getting groovy during the beach event!

Back over at Pier's park, we have noticed some interesting things about the marine life in these parts! The periwinkles are in general much larger! They are in shells that are about an inch to and inch and a half in size now! These sea snails are very abundant like always but the growth in size is very eye opening! Also, the fry (baby fish!) that we've seen around the dock are no longer a few millimeter in size! They too, have grown now to be vary to even an inch or more in size! Some of the cunners  that we've caught had been bigger as well! I'm hoping that if we give them a few more weeks, these 5-6 inch cunners will become an adequate fish fillet for one sea food loving LHE! Take a note of this week, because the female spider crabs that have been caught throughout this week have been carrying eggs! From an accidental discovery we have found that there's almost a fist full of crab eggs! That would definitely complement the cunner sushi I might have in a few weeks!

This weeks batch of harbor explorers were very into this one game called "Man for themselves!" Once the game starts, it's an intense match between everyone to try and tag everyone out! The objective of the game is to use your speed and try and tag someone out before they get you! If it's a tie, both parties particpate in a battle of rock-paper-scissors to determine a victor! Every time someone is tagged, everyone who has been tagged out by that one person is given another chance to be back in the game. A lot of times, it was just plain madness; harbor explorers would team up with some of the staff and surround their prey like a pack of wolves! On a daily basis, the harbor explorers  would request for me to bring them out kayaking! Most of them would do all the work and paddle for me anyways, thus I gave them a Raymond kayaking special where I'd bring them to just about the edge of the boat channel and Pier's Park sailing centers ship yard!