Hey guys, so these past 3 days at Piers Park have been pretty awesome. Within these days, we caught not one, not two, not three, but six fish. Sadly, none of them were on the fishing rods, but it was still pretty exciting. On Monday we caught two flounders in the crab trap and a Pogie. When we caught the Pogie, it was at the end when we were cleaning up our materials. Amanda was so into it as well, so why not take a picture of Amanda , taking a picture of the fish.

On Tuesday, we caught another flounder and Jake wanted to take a picture with the flounder in his hands because he had never done that before. He was actually really happy to hold it because as he said, "It was a new experience for me that I will never forget!"

Then today we caught another Pogie today. The kids were not that interested because it was the same type of fish and nothing different, but other kids were still quick to get a peep of  the fish that came in. 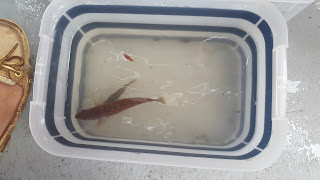