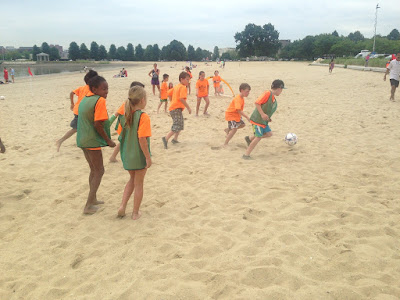 This was my first time working full time at Carson Beach in beautiful South Boston, where the city lies right behind the many Boston Harbor islands. It is definitely a beautiful site. The day started off with some games and fun from America Scores.  The icebreaker they performed was spectacular as the Save the Harbor/ Save The Bay crew got to meet and interact with other summer youth programs who also provide jobs for teens throughout the city of Boston. I had never played soccer before, so a lot of the games we had to play were extremely new to me. Competition was still at its highest.

Later on in the afternoon, when the different camp groups began strolling in, fun turned into more fun and more fun turned into memories that both the kids and the adults will cherish forever. The Malden YMCA was on the shore so the Save The Harbor crew gathered the buckets and shovels, and strolled down to enjoy the search for clams!!!

Everyone who knows me, knows that I am a big football guy–– a football fanatic!! It seems that the kids knew that too. "Hey you! do you want to get a game of football" a group of kids asked me. My face lit up with excitement, "YEAH LETS GO!" I replied. All the children and I had a wonderful time playing beach football and cracking jokes.  The heat was slowing me down, which called for a little intermission, but the youngin's called for another game. Of course before that group departed, another game was necessary. They didn't want to leave Boston. In fact I'm convinced they fell in love.


Looking back on the week as whole, the experience was unforgettable. The children were all amazing and brave enough to go outside their comfort zone to try something new and fun that they've never experienced before. As a guy wearing a blue shirt out there it feels good to be admired and called upon to spread light amongst the kids. I remember when I could fit into those same shoes, and I got the feeling they knew they had an unbelievable time. It's awesome. Every week I set a goal  for myself and this week the goal was make sure every camper was having fun and feeling happy. Whether it's cheering/motivating other kids to be good leaders or setting the bar for others to follow, if I did not obtain that goal I know I have failed at my job. Failure is ok, but it is not something one should make a habit. I personally don't settle with failure, but if it happens it happens and it's my job to also correct it and re-strategize on how to make things better the next time out.
-Dex Andrews
"Sea you on the Harbor"
at 7:04 AM