We always have success with our crabs traps at Piers Park, catching green crabs, spider crabs and rock crabs and even a flounder last week. Our fishing on the other hand has not been so successful, till this week that is! Harbor Explorer, Evelyn was smiling with excitement when she was reeling in her line. When we all realized that she got something, none of us would have guessed what she going to pull up. A flounder, a perch, maybe even a striped bass? Her little hands were grasping the rod and you can see the frustration on her face growing when the line was getting harder to reel in. 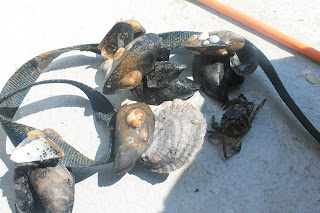 When she was finally done reeling in the line, we all just stood there in shock for a second. To our surprise, it wasn't a fish that she caught but something just as awesome. Evelyn looked at me with confusion and asked, "What is this?". It was covered in sediment from the ocean floor, which was smelled like oil and felt like it too. Once we rinsed it off, we realized that it was a blue belt with a metal hook. As the Harbor Explorers sat around us, they were pointing out everything that was on it. "There's tons of mussels on this thing", one kid shouted. "It smells!", Every kid said at some point during our discovery. Then one harbor explorer pointed out that there was one shell that was not like the others. The confusion and excitement of something other than a mussel was beaming of their little faces. Nikita, what is it?, they asked. Well it looks like our blue belt, covered in smelly, slimy sediment had a OYSTER living on it! Evelyn and everyone else was thrilled to catch and see something completely different than what we see every day. 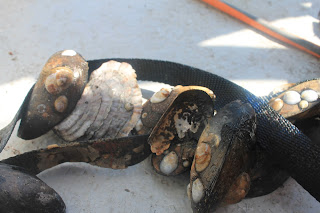 Each week at Piers Park is different. The weeks before we caught a flounder in our crab trap, this past week our harbor explorer caught an Oyster while fishing, which was an awesome surprise. That being said, I'm beyond excited for the weeks to come and you should be too!

Till our next adventure,
Nikita Cayabyab