Having fun with the team!

Hello friends of Save the Harbor!

One of the things I love about this job is that it brings me all over Boston! I am getting to know our communities a bit better, especially those that reside under the sea! 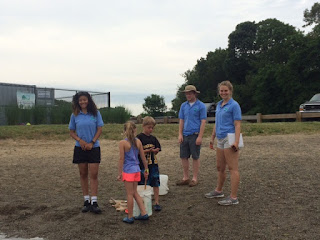 Monday and Tuesday at Blacks Creek were great! Here's Jessie, Danny and Daynaja taking care of our minnow buckets while Katie and Jack count minnows! We have started finding horseshoe crabs at Blacks Creek, which is always exciting for the kids. Those that are interested in dinosaurs are particularly interested in finding them, because horseshoe crabs have been on earth for a very, very long time! 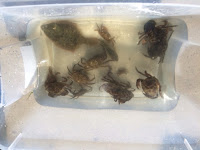 Next off, at Courageous Sailing, we caught our first flounder, and had some hungry crabs rolling around with it before our daily crab race! We had a lot of luck this week, we even caught our first lobster! Here's Luke and Jayda and Ruth in blue shirts (Ruth is photobombing behind Jayda!) with our campers Ted and Jaimie, holding the lobster! Ruth banded the lobster's claws with Luke so that nobody would get pinched. They worked quickly and efficiently, I was really impressed! 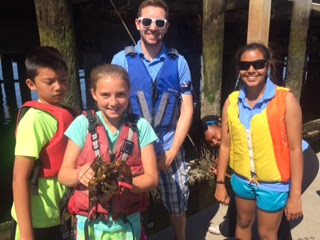 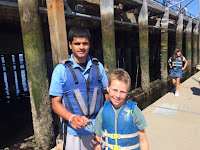 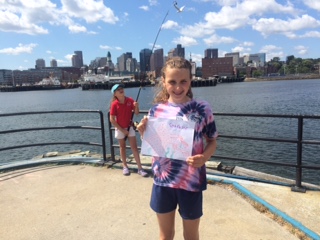 After we hit the docks, we always head up to fish on the pier. Andy, to the left  on Wednesday with Kyle and his crab, brought a ton of enthusiasm to our time on the pier. We sang STH/STB's fisherman song, and played a dancing game called "Ride that Pony." He was great at keeping the kids energetic!
Thursday was absolutely glorious in terms of weather, so we took a lot of pictures with our artwork! Anna drew this sea-star-lobster creature after she went fishing- she has a mean side-cast! We didn't catch anything, but the campers are learning to be more patient, and are really getting interested in our other educational activities!

Next, some news from CBI! We caught a bunch of fish this week, mostly sunfish, but a yellow perch and a bigmouth bass joined our catch! The small bass found its way into our eel trap, but some of the kids knew exactly what it was because they had been fishing with their parents. Too cool! 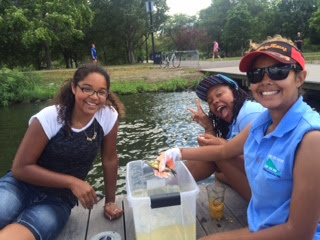 Here are Ruth and Jayda with the only camper who has caught two fish in a row, Tessa! Tessa caught two sunfish, one on a drop cast and one on a side cast. She is patient, and clearly has some fisherman's intuition! Jayda and Ruth are energetic and always on task. I had a ton of fun with them this week, and must admit, I have a lot to learn from them! Jayda is an expert at getting fish off of hooks, and I had to watch closely to learn a trick or two. Ruth got more involved with art this week, and has amazing interpersonal skills, so fielding question after question from the kids has yet to tire her out!

I am feeling lucky to have such great coworkers- I had to spotlight them a bit this week!