Off to a Good Start

This week has once again started great. We caught our first skate, which was great. This week I have had the pleasure to be on Spectical Island. There we have finally started catching fish. Catching the skate was great, especially when it was so unexpected. 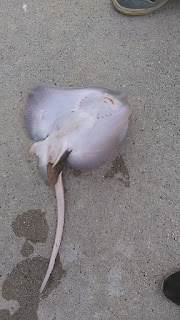 Asides from the skate we caught at least 30 crabs that really intrigued the kids. Though it seems as though I had enough fun, I got to go swimming which was hilarious because everyone was freezing, except David of course. Before heading to the adventures of Spectacle, I spent some time at the Children's Museum. It was so hot that day that we spent half of the day inside with a touch tank and lots of coloring. We were able to interact with the kids as a group which was fun. We continuously bounced off of each others knowledge to paint a picture of the sea life in the harbor. It was Amazing because when one person didn't know the answer to a question, someone else did know so they would chime in and say what they know and all together. We have an amazing amount of knowledge about the harbor. 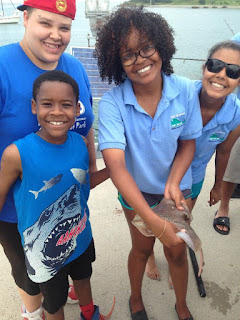 Until next time.
~Jayda