Today I was fortunate enough to try Camp Harbor View's daunting high-rope course. I rode on what is called the Slingshot, a contraption where one is first hauled 45 feet into the air and then dropped at the pull of rip-chord causing them to swing about freely as if they were a human pendulum. I was amazed at the bravery of the young campers, that they would attempt such a thing; I am 20 years old and even I was terrified of the construct! I hooked up to a harness, strapped on a helmet and was "ready to fly" as was the slogan uttered by the assisting young campers who were in fact instructing me throughout the entire process. 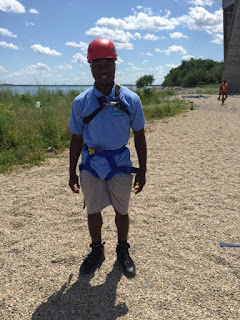 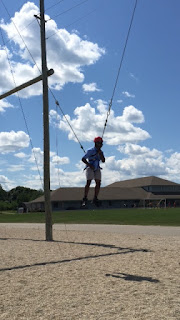 I remember just how high that rope took you; in the beginning I was trying to convince myself that this wasn't so bad, but the rope continued to carry me ever higher until I was above the entire camp! At the top, I could barely look down let alone pull the rip-chord to release myself. I desperately wanted to come back down to ground level, but sadly I realized that there was only one way down. I pulled that chord and whoosh, my body began free falling as if the single rope keeping me suspended had detached at the pulling of the rip-chord. Thankfully, this was not the case and I began swinging back and forth, bck and forth with so much speed that I probably could have cleared a football field had I let go. Honestly, I'm just glad I didn't lose my lunch!

Labels: Camp Harbor view 2015, Maxwilliams Iwuala, Save the Harbor / Save the Bay