Hello Friends, here is a recap of the first two days of fishing during our return to Spectacle Island.

Day 1:  On Tuesday Ahmed, Antonio and Drea successfully helped a camper reel in a skate!  The skate, which now rests in a pizza box at the Save the Harbor Save the Bay offices, was caught on a stationary rod that had been secured to a post on the pier.  Noticing that the line was taught, the AABH crew untied it and handed it to a camper who successfully landed the skate.  Once landed, Ahmed removed the hook from the skate’s mouth and allowed the campers to examine it.  JPA Antonio, who had not seen a live skate before, commented that the skate mouth looked “human.” 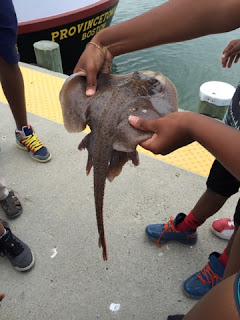 Day 2:  On Wednesday AABH provided the opportunity to fish to over 55 campers.  The campers took turns examining lures, bait, and casting their lines into the harbor.  Additionally, the campers were excited to find that our crab traps had landed over forty crabs and one lobster – all of which were eventually returned to the harbor. 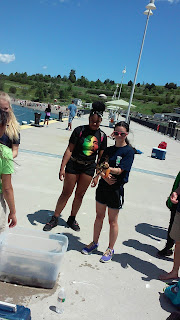 The return to Spectacle Island has produced strong results.  Hopefully, tomorrow AABH will continue to provide campers with opportunities to handle fishing gear and observe the animals living in Boston’s coastal waters. 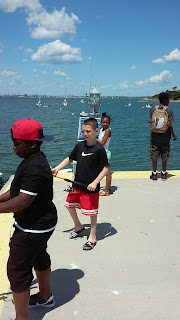 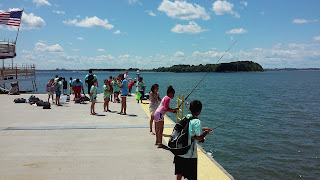