Hey everyone I hope everyone has had a good second week I know I have. This week has been great. So each day I have met so many kids with so many personalities and funny characters and cool stories to tell. For example this week I was teaching a little girl how to fish and she was probably ten years old. One of the questions I always ask kids are have you ever fished before? Sometimes they will say yes, sometimes they will say no, and sometimes they will say all the time. This girl said yes she had fished twice before. She said she had caught a small fish the first time and the second time she had caught a shark. I was so surprised about the shark. Even though you don't hear about kids catching sharks very often, I was still impressed. She had such a sweet personality. She was very kind and very polite and really knew how to fish. 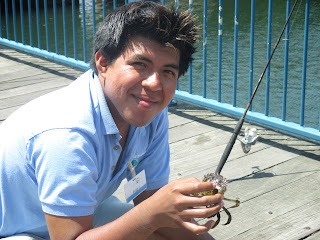 On the other hand, later in the week, I met a young boy. He and I started fishing together. Just as he started he asked me do we catch any tuna at the childrens museum and I said no not really. Although what was cool is we learned we had something in common. That was that even though we would both like to catch a tuna fish someday, we both hated eating tuna fish. Also later that day he came back and he came over to me and he said "hi were back do you remember me"? and I thought that was so sweet. And of course I replied with, yes, I totally remember you. Those were the high points of my week. The low point of my week is that on Thursday I got an awful sunburn. Even though several people said you should put sun block on, I was being stubborn, but sometimes you have to live with the consequences of being stuburn. That's it for my blog. I do hope everyone enjoys there weekend and like I always say I cant wait to continue and enjoy the rest of my summer with save the harbor save the bay. 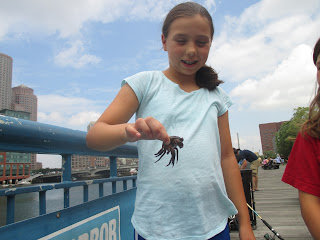