Yesterday was my first time visiting Peddock's Island, one of the Boston Harbor islands in the rotation of the "All Access" team here at Save the Harbor/Save the Bay. I had heard that All Access was fun, but I was unprepared for just how fun. After arriving on the island we immediately began a game of kickball, the holy grail of ll recess activities; my inner child was torn out of me, arriving with a hunger that could only be quenched by home-runs. Sadly my team and I were defeated 8-4 with the last four runs of the opponents runs coming in the last inning! 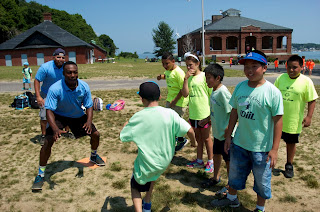 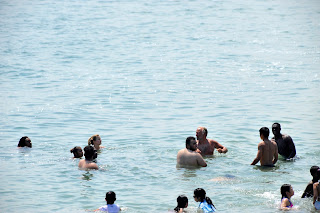 Only one thing could have washed away that heavy stench of defeat and that is the crashing of waves from the Atlantic Ocean; in other words, we went swimming. It was there on the beach that I encountered the infamous David Coffin, known for his expertise in the involuntary depositions of unsuspecting victims into the water. But today, he would no longer be considered a threat to the kind townspeople of Save the Harbor/Save the Bay as on this day the mighty David was smitten, and at the hands of his own craft no less. After years of tormenting the poor village, the warriors were finally able to band together and cast the hardy beast into the ocean. And the village lived happy ever after..