Hello everyone its Jahari again! So, so far there have been two days of work at save the harbor and they have gone pretty smooth. I'm in a group with Zach, Ana, Nieomi, and Eric. We we're set to station at Blacks Creek. Blacks Creek is what you would expect a creek to look like, so its like a little beach with some grassy land around the area as well. We had two groups of kids come each day and for the first activity that we did were two get to know you games. One game was called "Where the Wild Wind Blows" and some other game where we would have the kids say the name of their favorite sea creature and act as if they were that sea creature they named. After those we gave the kids nets to look in the water for some crabs mainly, which we did catch by the way. BUT, on Thursday we came across a Horseshoe Crab... A FREAKING HORSESHOE CRAB YALL! Before Thursday I have never seen a live Horseshoe Crab before, only dead ones. These are reasons why I love love working at Save the Harbor, we get to see things that we do not see on a regular day to day basis. But after we were done with the kids we would go on break then to the Children's Museum and give our other fellow coworkers some assistance. I cant wait to tell ya'll how next week goes, bye! 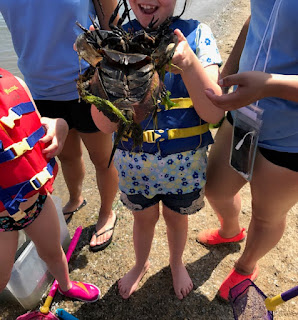