Today we took our first fishing trip with the kids from Camp Harbor View! It was so much fun! Everybody on the boat caught at least one fish whether it be a flounder or a bass. Some of the kids got discouraged when they weren't catching any fish but others had already caught two. After a while they started catching fish and were super enthusiastic about catching more! One of the funniest parts was when the kids tried to put the sea worms on their own hooks and got really grossed out. It was also hilarious when one camper named Joshua was trying to hold a fish but got freaked out and dropped it. It started flopping around and he tried to move away so fast he fell on top of the backpacks. After dropping the kids off at the island we headed home where we stopped to do some fishing of our own. I can't wait to take another trip with the kids, it really was a blast! 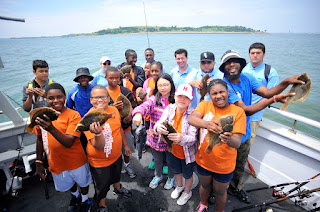 Labels: CHV Fishing Trip, samantha bowman, Save the Harbor / Save the Bay