A Minnow Crossing the Ocean

Welcome back to another post from a fisherman in training! The highlights of this week: a big rock crab, two skates, "stickers", and a fractured toe.

We easily average about twenty to thirty crabs a day at Pier's Park. This week in particular we caught a rock crab that spanned about 7 inches length wise! Luckily for this big guy, none of us were interested in keeping him for dinner, so he was released later that day. Before that happened though, one of the staff that we work with at Pier's Park Sailing Center told me that in all the years she has watched over the kids handling crabs, she never actually held a crab herself! I am proud to say that after this week, this staff member can without a doubt tell anyone that she got past her fear of crabs, just long enough to get a photo with one in her bare hands! #UppingSomeonesSelfieGame 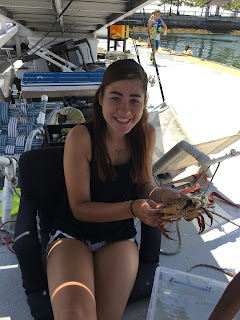 On Thursday I had an amazing opportunity to learn about fishing from some amazing people: Bruce, Sam and Captain Charlie! Alongside Maeve, Mauricio, Abel, Cristin, and Ahmed we each adopted a kid or two for the day to aid them in fishing. Once the boat was out in the waters, it didn't take long for me to bond with the crew. First and foremost, Sam, also known as "stickers," is quite a guy! As kids where squirming in place over the thought of just touching a sea worm, Sam made himself known. One of the neat things about the sea worms that we had as bait was the fact that they have pincers. After Sam said something along the lines of, "You guys want to know a trick on how to not get pinched?," he bit off the end of the sea worm that had the pincers. It was barbaric and I loved everyone moment. I just wish I got it on camera. During this trip I caught two skates! I finally figured out the difference between a skate and a flounder!

When I play alongside the kids in Sharks and Minnows, I try my best to make sure that the kids are safe and that I am also enjoying what I am doing! On a daily basis, that means I am running full speed to dodge the kids from making me into sea weed (and I am not the only staff to do so)! The kids, other staff, and I all have a blast when we play like this! Unfortunately, due to me stubbing my toe last week, I finally had my injury catch up to me while I was running this past Friday. My "ring toe" was aching and was purple by the end of the first round of Sharks and Minnows. At the end of the day, when the kids started playing capture the flag, one team told me that they needed me. Without a second thought, I jumped into the game and played the rest of the day! 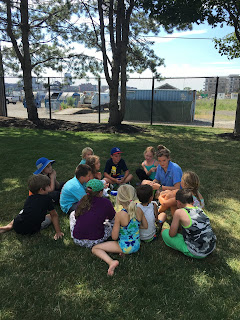