In the past week at Blacks Creek, we've been inspired to try out a few new games to entertain, amuse and get kids (and staff) moving after snack time. First was Sedny's contribution, a game called "Blink Killer," which involves a lot of dramatic "deaths" and some serious detective work.

But most exciting was the unveiling of Ga-ga Ball, played in a newly built octagonal pen in the upper field. Last week, we saw folks from Quincy Rec constructing the mysterious wooden play structure by the pavilion, and a couple days ago we had our first chance to try it out. Ga-ga Ball is a huge hit, and we've played round after round since then! The rules are as follows (according to the official website of The Gaga Center): 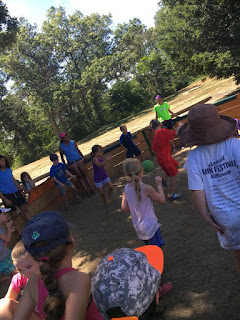