Hey guys, it is day three at Piers Park. Today was the first day that the kids got to do some fish printing. They were really excited to do it. We broke the kids into small groups and the tables had to come up with a group idea on what colors and design they wanted their flounder to have. One table made a pink flounder with yellow spots and another table made their flounder red with green stripes and white fins. They came out really well. The kids were smiling with the amazing ideas that they came up with. We even let the kids have a choice between the flounder or a mackerel. Most of the kids chose the flounder because it was bigger, but some kids did decided to use the mackerel.

The kids also went to the park today and had a water fight. Kids were trading teams and going rogue. Then all of a sudden, when they heard the music from the ice cream truck; they ran to the fence just to stare at all the different ice creams. It was so adorable to see their little faces light up at the ice cream truck rolling by. Today was a great day once again. See you later
-Ary 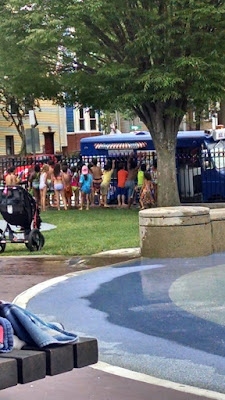