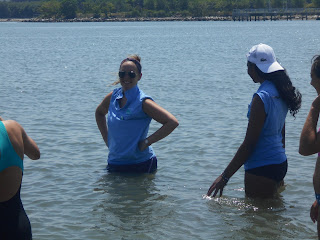 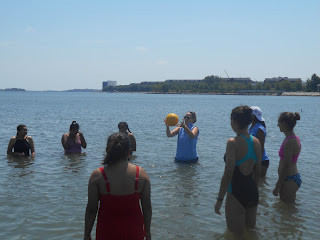 Hey guys! Happy weekend! Today at Carson, we had the pleasure of hanging out with a group called "Let's Get Movin'" from East Boston. The mission of this group is to promote physical activity and strength to children from ages eight through fourteen. We had a group of fourteen girls, ages ten to thirteen, join us today for some beach fun! Our original plan was to engage in some sports games and fun on the sand. But this heat?! No way! All of the girls wanted to go swimming, and us harbor explorers were not opposed to getting a little wet on a day like today (it comes with the territory of Carson). But instead of calling it a wash, we decided to join the two ideas together. We brought our volleyball into the water and slowly but surely got a little game going. At first some of the girls seemed nervous or shy to participate in some light fun. But soon enough, our circle got bigger and bigger and I think they realized that I was not very good either (I cannot speak for my fellow explorers, but I am no volleyball star). Here are a couple of photos at the beginning of the activity. 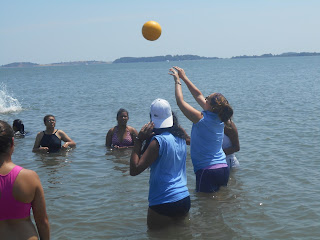 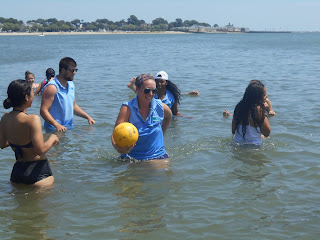 Well, I guess I cannot say exactly how it happened, but then the game morphed into some volleyball-turned-monkey in the middle activity. It was hilarious! If the person in the middle got the ball, whoever had touched it last had to switch and become the new monkey. To be honest, I was the monkey twice (see the photo! Sigh.). And let me tell you, it was stressful! I was trying to "get up" as Preston would say, but not so easy with running shorts weighing you down in the ocean! It was hilarious. My favorite part was the dedication that these girls showed: diving for the ball, jumping up so high to get it, swimming out to it if it left the circle, so that the monkey would not get there first. It was amazing! I think overall, this group had a ton of fun getting moving and still staying cool on this hot beach day! And I may have been in a polo and shorts, but nothing was stopping me from joining the harbor fun!