So instead of catching Pokemon this week with Pokemon GO, I was catching fish at the Charles River! After a dishearteningly low catch count last week, I was incredibly excited that the kids at Community Boating caught a ton of fish today and yesterday. Our secret was new bait: Harry, who runs the environmental science program at Community Boating, brought over a container of live worms. Since we were freshwater fishing in the lagoon on the Charles River Esplanade, the worms worked really well.

Monday was off to a good start as we pulled up the eel trap to start the day. In the trap, we caught one perch, two sunfish, and a very slimy eel. The eel unfortunately slipped out of our fingers before we could give the kids a closer look. After looking at the trap, we moved to the lagoon to start fishing. 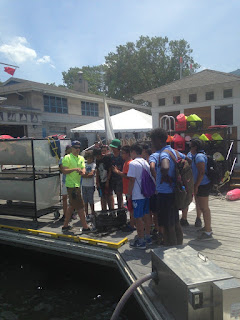 Everyone gathered around the eel trap

Many of the kids we had at camp this week had not fished before, but they picked it up quickly and were excited to learn. Only a few trees were hooked in the process! Overall, we caught a lot of bluegill sunfish and pumpkinseed sunfish, and a few yellow perch.

Pretty soon, kids were pulling up fish left and right. By Tuesday, some of the kids had caught more than five fish apiece. Even better, the kids were learning how to identify the fish, and I was learning how to gently take them off the hook without causing any damage. I learned that you should cup your hand around the fish when you take it off, then hold on tight so it can’t slip out of your hands! I dropped a few fish before I got this technique down. 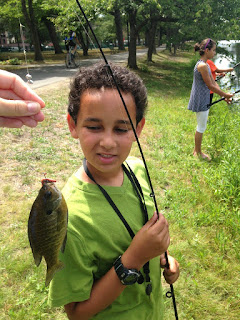 A camper with his pumpkinseed sunfish catch

I also learned that the pumpkinseed sunfish have some really neat adaptations to help them survive. First, the spotted pattern on their bodies helps them camouflage, as it blends in to the patterns of sunlight in the water where they live. Also, pumpkinseed sunfish have sharp spines along their dorsal fin, which they use for protection from predators. I accidentally got stabbed by one of these spines while handling one of the fish, and I can easily see how they could be used to deter a predator!
It was an exciting few days of fishing, and I’m looking forward to going back to Community Boating next week!