The secret to removing mud, Sand

Through this past week In Carson the tide was low, low to the point where it looked disgusting even felt disgusting. Besides that it was an opportunity to go clamming in the area where it was low tide. I decided to tag along with Joe and Abel although I was the only one wearing shoes and with black jeans as well. It was hard to move in that area with the kids flinging the mud and clay everywhere with the tools they were given to use. After only a few minutes the kids found a clam while Abel and I found a broken piece of a clam, here's a picture of Joe holding the clam that the kids found. 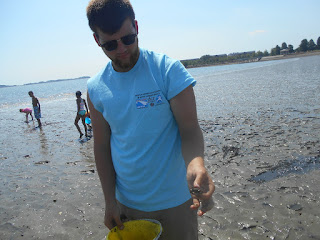 A few minutes later we decided to tread deeper into the area which was where I had to leave due to the fact that my shoes made me feel like I was walking in quicksand. The question of how to clean my shoes then came and I honestly didn't know what to do, but after running up to the beach the sand covered all the mud on my shoes and after a few minutes all the mud was gone and what was left were a few marks of mud but that was easily removed by more running through the sand. In the end It was fun that I got to join in on the clam hunting but what I kinda still regret was that I had my shoes on.
at 1:04 PM