So, if you've been keeping up with any of my blogs, you'll notice a trend. Every single cool thing I've talked about has happened at Carson Beach. I mean, everything that happens at Carson Beach is exciting so can you blame me? But in reality, until yesterday (Wednesday), it was the only site I'd had the pleasure to work at. Early this week, when I heard that there was another fishing trip for Camp Harbor View, I volunteered to go. When I was told yes, I was beyond excited not only to work with some staff members I do not get to very often, but also engage with new faces and do new things! We don't really fish at Carson, and halfway through the summer, I was dying to give it a go! 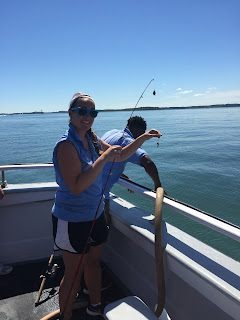 After collecting the campers and getting ourselves together, we made our way to Captain Charlie and Sam's fishing charter. The kids were clearly excited, and it was awesome to be able to see the kinds of bonds they'd made with the Harbor Explorers prior to that day. Well. We get going, heading out into the depths of Boston Harbor. I was a little hungry. I say to Kristen, "Hey, do you think it would be weird if I just ate a banana while we're heading out there?" She laughs and says, "No go ahead!" So I take my banana out and begin eating it. I then hear Sam say "You are NOT really eating a banana right now, are you?!" I stared at him in shock and said, "Yeah." He tells Charlie to turn around. Captain Charlie sees me, rolls his eyes and yells, "Peel overboard!" I say, "Wait, really?" and Sam says, "Yes. Really. Otherwise we won't catch anything." Well I whipped that banana peel SO fast over the side of the boat and could not stop laughing. I think Kristen and I had tears in our eyes. 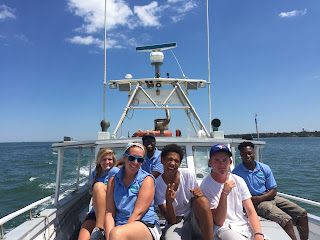 Fast forward to us anchoring in our first (of over a handful) fishing spots. I watched Sam bite the head off of a seaworm and spit it out before showing everyone how to bait the hook. Gross. I dropped my line and waited. I moved to several spots around the boat, as I did not want to either get tangled with another line, and also, I wanted all the fish for myself! Well. The only thing I managed to catch all day was a huge chunk of seaweed and a missing seaworm via a crab! Sigh. But the others' luck was not much better. Only two flounder for keeps, among some skates and some flounder that were not big enough to keep and had to be returned to sea. On the ride home, sitting with my friends and fellow explorers on the bow, Kristen and I recounted the banana story to all. We decided that although that may not be the real reason we had an unsuccessful fishing trip, it was sure a great story to tell! And, if hanging out with new friends and faces and laughing is an unsuccessful day, then count me in!

Catch you at Carson,