Capturing The Flag at Piers Park 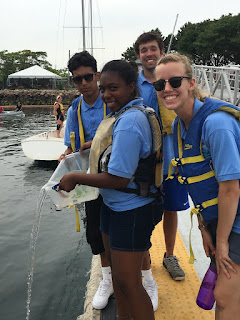 I felt weird the first day at Piers Park, but on the second day I felt like I'd been on the site for the whole summer.  I was lost and didn't know what to do at first, but now I know the routine. I'm getting used to having the same kids everyday, and playing new games. It's funny how the kids know the activities, what we're about to do and still asking us if we're going to do them. One thing that I find weird is that the kids prefer to play cards on a hot day than play on the water or the park. It's funny how my day went from kind of boring and slow day, to a really fun and entertaining one. After taking the kids to the park, we're suppose to play "capture the flag" with them. Playing this game and going to the dock are the things that the kids enjoy the most because they always ask if we are going to play or go down. When we started to play "capture the flag" I was kind of lost because I've never played the game before. I had an idea but still. My team explained me the rules and the plan. It was a really tight game. Both of the teams had half of the players in jail, when I noticed that all of the kids were paying more attention to the other kids than me, I decided to risk it and go for the flag. Once they saw me running with the flag, all the kids and the staff playing on the other team started to chase me. After going through all of them, I finally got my team's flag and gave my team a win. The same thing happened for the next two games, but on the third one I decided to go in the other team's territory and try to distract them while the kids from my team took their flag. It worked! I couldn't believe that at my first time playing the game, I helped the team to get three straight victories. All the kids on my team were happy and started to communicate more with me. I'm not going to lie, I really like this site.