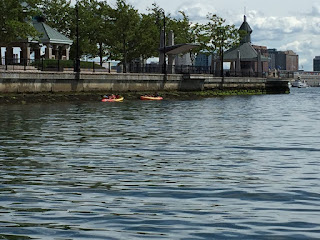 I found myself kayaking a lot more this week. I'm not sure if it was because the sun did not feel as strong or if the water was nice and refreshing on such a hot day. Either way, the kids seemed to love to kayak up to the rocks and search for Periwinkles. Periwinkle is another name for snails. The snails we found stuck onto these rocks and they come out of their shells for water and music! We hummed and the snails peaked out of their shells to say hello. It was a nice experience because the kids really seemed to love finding periwinkles. Not only that but we ended up finding two starfish in the water near the rocks! Sean ended up using his paddle to grab them, which was easily done because they were found near the rocks where the water is shallow. It was great to see kids so interested in even the smaller sea creatures.

One thing that I learned was that kids are not very interested in paddling. Every time I take them out, it starts the same way. All of them beg to paddle, but by the time we go back to the dock they are barely holding the oars in their laps. It was still a lot of fun teaching them how to correctly paddle. It started out simply enough by showing them that to hold it correctly, the words at the bottom should face them. Once they got that, I started explaining that if they wanted to turn right, they should paddle on the left, and if they wanted to turn left they should paddle on the right side. I showed them that to do a sharp turn you simply stick your paddle on the side you want to turn and slightly push against the water. However, despite my efforts of teaching them, I always seemed to be the last one paddling, probably because the kids were too interested in grabbing the trash that they found in the water, as I mentioned in my last blog, or grabbing seaweed or periwinkles or being on the lookout for moon jellyfish.

We found a lot of cool animals last week, and I hope to find a lot more this week. Til next time,