This week at Community Boating, we continued catching lots of fish and teaching the kids environmental science lessons. We started each session in the classroom, where we introduced ourselves to the kids and told them a bit about what Save the Harbor does in Boston. We took turns telling the kids lots of fun facts, like that Boston has some of the cleanest beaches in the country, that Spectacle Island was once covered with trash that burned for 10 years, and that the "dinosaur eggs" on Deer Island are responsible for treating wastewater. Andrea told the kids a great fact, which is that the wastewater treatment plant cleans so much water each day that it could fill up the Prudential Center three times!

We also had a really great discussion about recycling and trash, and we had the kids guess how long it takes for certain types of trash to decompose. In addition, we talked about the problem of invasive species, like the green crabs in the Boston Harbor. I was really impressed that the students were thinking like scientists and coming up with all sorts of ways to remedy the invasive species problem. They were starting to understand how complex environmental problems can be, and they seemed eager to help fix them!

After the lessons in the classroom, we spent the rest of our days at CBI on the Esplanade, fishing in the lagoon. With the worms as bait, the kids continued to catch fish after fish, and even started learning how to identify them.

Here are a few pictures of some campers and their catches: 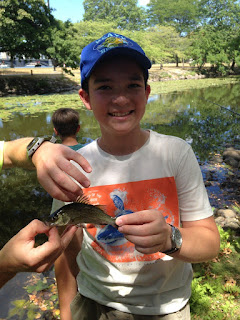 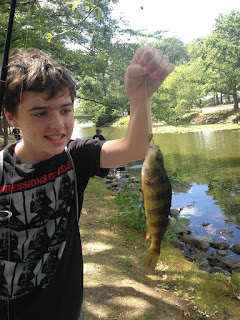 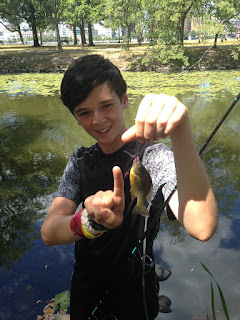 We also managed to catch a baby snapping turtle out of the lagoon while we were fishing, which was awesome for the kids to see! 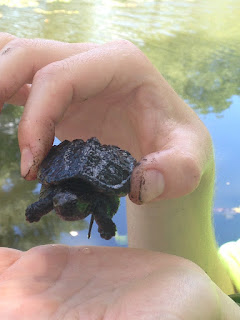 
I'm hoping we can catch even more fish, see more wildlife, and have more great discussions during the science lessons at CBI next week.