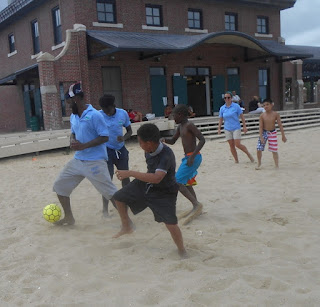 Hey guys, its Preston again. This week was by far one of the hottest weeks of the summer. This didn't stop the fun at Carson one bit. Throughout the heat it was a struggle staying hydrated, but we managed to do it for the kids! This week, we had huge soccer games with all the camps that came to Carson. We had campers vs counsellors, campers vs campers, we even had camp vs camp games as well. I'm not much of a soccer player myself but it's a pretty good workout when you're on the beach. And ever since the summer started, I became a better soccer player, along with many of the children. 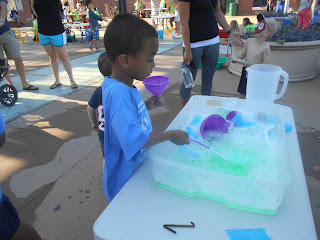 We played soccer from sun up to sun down. And when the sun went down it was Family Fun night with the South Boston Neighborhood House. They had face painting, bubble machines, Norah Dooley was there telling pirate stories, and my favorite...FREE SLUSHIES!

It was an amazing day for families to bring their children down and have a fun night with Save the Harbor. The children got to fish print and collect coins from a pirate. If you didn't see smiles earlier during soccer, you definitely did at Family Fun Night. It was a great event and I hope to do it again real soon. Until next time, Preston.