The Harbor is Alive!

What a week! We've been catching creatures all summer at Piers Park, but not until recently have we caught any fish. At the end of last week, our Harbor explorers discovered a tautog in one of our crab traps. It was small, but the biggest of the fish that we've caught so far; about five inches long, brown, with black stripes and blotches down its back. It also had a long fin that ran down the entirety of it's spine, and human-like teeth! Next time we catch a tautog, we will get a picture of it smiling! 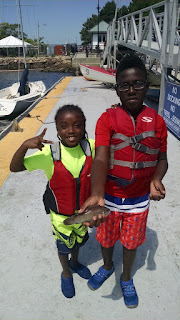 Yesterday, we found a bunch of new types of fish. Earlier in the day, in another crab trap, the kids pulled up a small flounder! This fish was about an inch shorter than the tautog. We put it into a touch tank so that the kids could learn a thing or two about flounders, first hand! The kids gently touched the flounder and noticed it's slimy skin. They were also surprised by how it swam. Unlike most fish, flounder swim parallel to the seafloor, touching the bottom's surface. They are flat and brown, so they are almost undetectable in their habitats. In the touch tank, it's dark scales were clearly visible, and we were able to observe the way that it moved around. It was a great start to the day.

Now, this next catch may seem a bit fishy (ha), because I was the only one to witness it happen, but I promise, it really DID happen! I've mentioned in previous blogs that sometimes for bait, we'll lie on our stomachs, reach under the dock and grab a handful of mussels.Well, on Wednesday I did just that, and as I was standing up, a very small fish fell from my hand, flopped on the dock for a second, and then bounced back into the water and swam away. I was shocked! Whatever type of fish it was, it must have been feeding off of mussel meat. I know I didn't technically land the fish and it got away almost immediately, but it touched the dock, and in my book, that's an official catch. So, I literally caught a fish with my bare hands, no big deal. The ecosystem under the dock continues to amaze me, and has been slowly revealing itself throughout the course of the summer.

At the end of the day, just as we were leaving the dock, we pulled up another small fish in a crab trap. This was the tiniest of the bunch, and we immediately let it go because we were pressed for time. It looked like a very small striped bass, and the kids were able to touch it and hold it briefly. They were the most excited after we placed it into the water and it swam away.

And for the grand finale of this week, today at Piers Park, for the first time, we caught something on a fishing rod. Arguably the coolest and most interesting thing we've caught all summer, it was awesome. Read my next blog to uncover what we found, I'll tell you all about it!
-SEAN