First off, I want to mention that on Monday when we met the new kids, I got lucky and got another batch of kids who were either taking or took gymnastics. Within the span of 3 days these talented little ones have instructed me enough on walking handstands that I can now walk a few feet without my feet! Special thanks to Devy and Camilla for their gymnastic guidance. 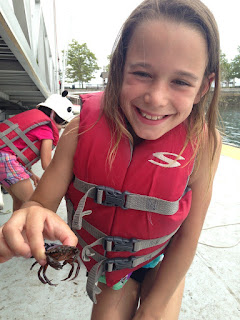 This week we were a lot more observant and found a lot of neat critters! On my hand in the next picture is this weird patch we found on a mussel shell that I just ripped off. I have no clue what it is, but it looked awesome. 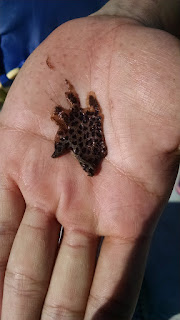 On Tuesday the staff and kids were very observant when we were prepping the crab traps. When we pulled one of the crab traps in, we somehow caught a juvenile PIPE FISH! It was barely over an inch long and barely thicker than a toothpick; it was by far one of the coolest finds in my book this whole summer. One of the kids named James shared the same ecstatic feeling as I did and quickly got him in a bucket in the shade for further examination. I wish I could have showed you guys this amazing little thing, but we ended up putting it back into the Harbor before we got the chance to snag a few photos. It was later that day that I did some research on pipe fish and the green little guy or girl that we had is a relative of Sea Horses and Sea Dragons. We also have noticed that on the mussel shells that we use as bait, there are often these small creatures that accidentally fall into our hands. On closer examination, we seem to have found these small shrimp-shaped creatures that are about a centimeter in size, small species of worms that resemble sea worms but without pincers, and these pieces of seaweed that seem to twist and twirl in place which the kids and staff (including myself) have nicknamed "dancing worms." 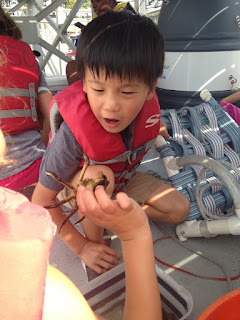 We have seen a lot less moths in the past week or so, however flies have been on the rise! These flies are annoying; we have kids and staff alike getting nipped or poked by these flies! Believe it or not, but Sean happened to stumble across some molted snake skin that belonged to a small snake that noone has yet to spot in Pier's Park. Who knows what we will find next?

I'll get more photos of these critters in the following blog posts!
Raymond Chai
at 3:20 PM