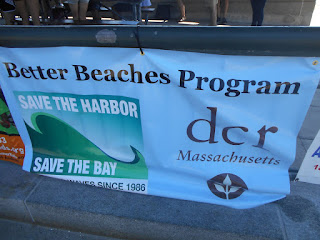 On Saturday, a few of us at Save the Harbor attended the Sound Waves event on Spectacle Island. Sound Waves is Boston Harbor's only Blues Beach Festival, where a few bands hop on board a concert ferry and play tunes while we cruise over to Boston's beautiful Harbor Islands. At Spectacle Island, people can get off of the ferry and go hiking, swim at the Island's sandy beaches, look for Spectacle's famous sea glass, or have lunch under the shade at their lunch patio. You don't have to leave the boat though. A bunch of concert goers stayed on board all day, soaking in the sun and enjoying the event's many bands.

The weather couldn't have been better this year: it was hot and sunny all day with cloud spotted, blue skies. We went with some attendees to the beach, where we dipped our feet into the refreshing water and listened to the bands from a short distance. They played a lot of their own songs, but also a bunch of fan favorites that everyone could sing along to. It was a perfect mixture for grooving to some unfamiliar sounds and singing along to some classic hits. 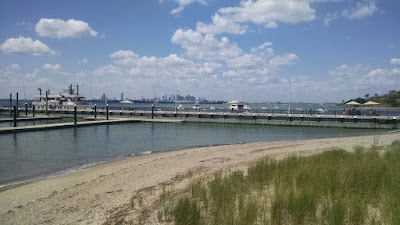 We were warmly welcomed by the event organizer, John Hall, who produced a flawlessly smooth event, and a few of the concert attendees who noticed us right away by our blue Save the Harbor shirts. Immediately after the boat left the dock, a man introduced himself to us and began praising Save the Harbor and all that we've done over the years to clean the area. He recalled when he was a teenager and went boating on his friend's vessel, how dirty and toxic the water was. He said that as they sailed through the Harbor, they'd constantly run into trash and other objects that were thrown into the water. It's obviously, no longer like that! Throughout the day, he'd see us and point out the beauty that the Boston Harbor has become and say, "This is all here because of you guys and the organization that you work for."

It feels great to be part of an organization that has done so much for the city and it's people. I can't wait to meet people at the rest of this year's Better Beaches Events and hear how happy they are with Save the Harbor/ Save the Bay!