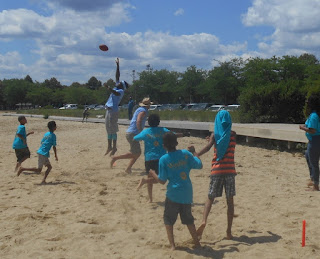 Hey guys its Preston again! Let's get a few things straight. shall we? Yes, that was a catch. Yes, that was a touchdown. And yes, the kids do call me Odell. Now that we've gotten that out of the way: Tuesday's football game was honestly the most thrilling game of football that I have played in a while. Both teams weren't giving up an inch. But as we all know, there had to be a winner.

Team Odell vs Team Joe; it was a hot day, but the kids came with their game faces ready to play. At first, it was a hard fought game. With neither team scoring in the first 20 minutes, the words "10 minutes left" echoed the beach as the camp counselor screamed at the top of her lungs. It was crunch time for both teams. With a quick score for Team Odell, Team Joe was now pressed for both time and points. With 4 minutes left to go, Jaylen from Team Odell quickly turned around and scooped a fumble all the way to the end zone. Now up two scores, Team Joe needed to turn it around, and needed to do it fast. 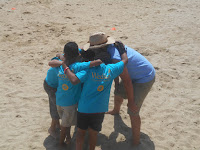 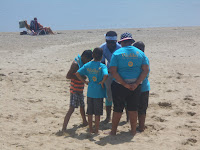 As both teams huddled up for what was about to be the last play of the game, it was do or die: next score wins. Team Odell came too far to let Team Joe take the victory! I remember it since it was yesterday. The ball was in the air, and it felt like slow motion. Whose hands would it fall into? Mine, followed by two members of Team Joe. I looked up with one eye, while sand was in the other. The ball hit the ground. Incomplete pass. Team Odell took the win, but narrowly. The kids celebrated as they jumped and skipped to a well-deserved lunch break. I looked at Joe and said "that was an amazing game." We both laughed and started making sand castles. It's just the beginning of summer, and I hope for more football games like this one. This one will go down in the books for me. Until my next blog, Preston.