As you cruise around the Boston Harbor, when passing Long Island you can see three fixtures that exist there: the orange flags that border the dock welcoming boats to Camp Harbor View; the hundreds of campers running around in their orange shirts; and now the bright orange rock installations in the intertidal zone on the main beach. 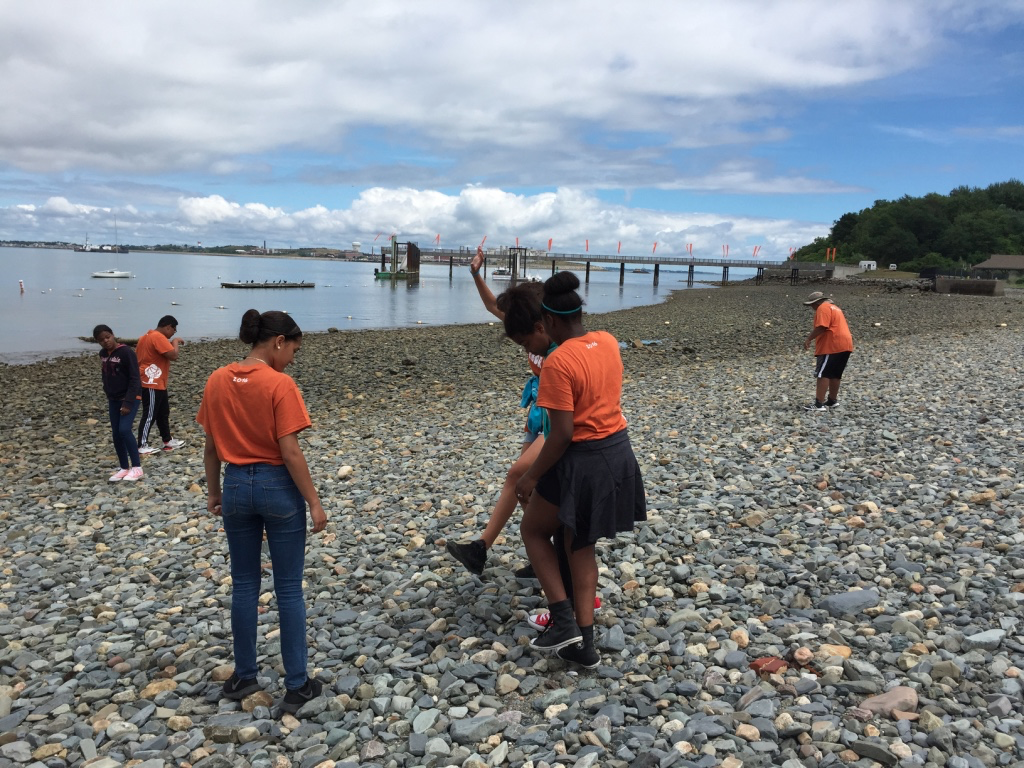 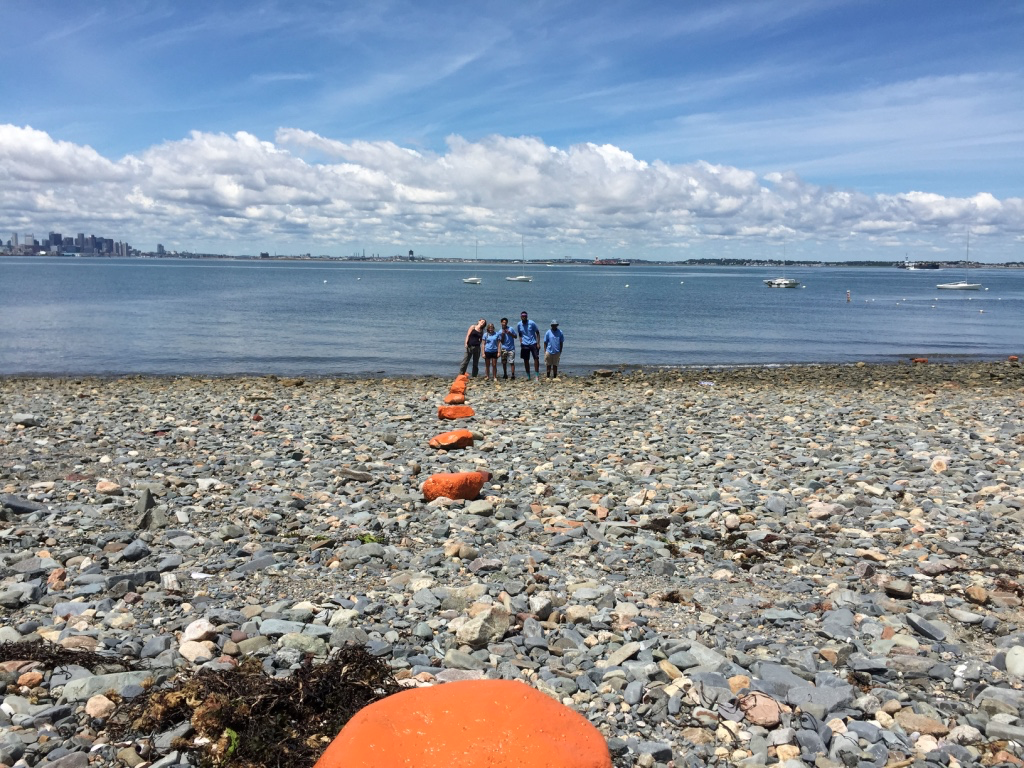 Last week, our resident Russian environmental artist Olga visited us at CHV equipped with her bright orange spray paint. She engaged the kids in an informative rock painting session, and as the paint dried, the campers were able to help install The Rising Tide fixture in the intertidal zone. The piece consists of thirteen large rocks that the campers moved into a line - the first rock at the average high tide line, and the last rock at the average low tide line. They were then presented with the challenge of measuring out where the rocks were to be placed in between, so that they left twelve even spaces in between. 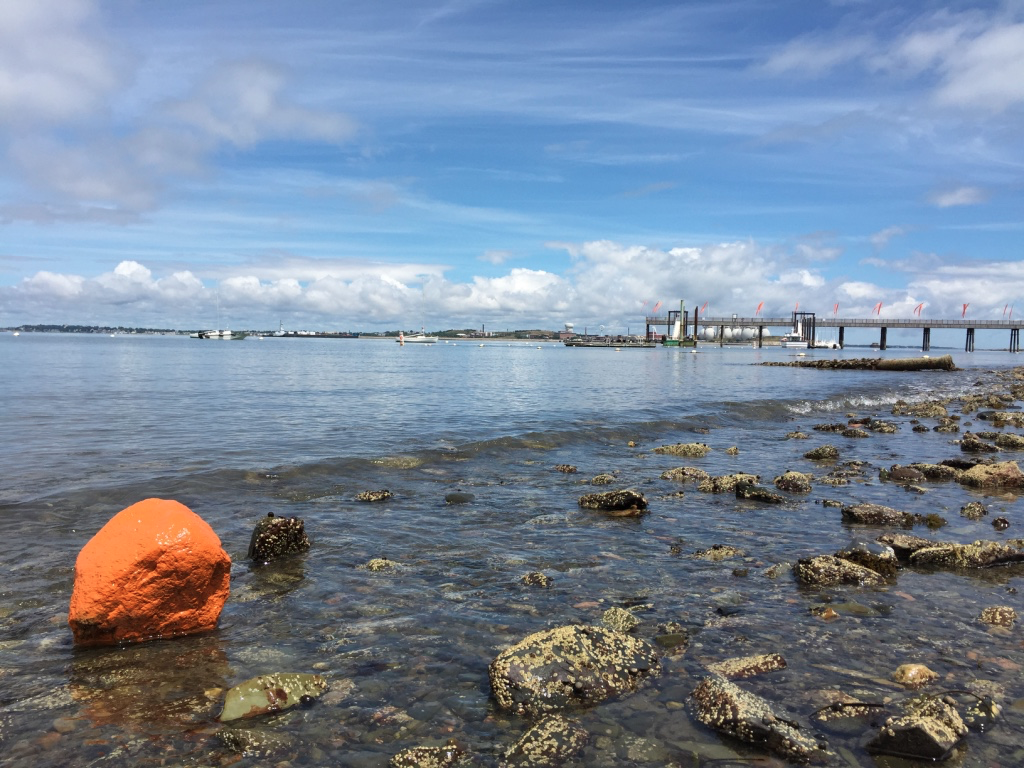 The twelve spaces marked out by the rocks denote the "rule of twelfths" that explains the movement of the tide, and the height of the tide at any given point during the day. As we explained to the campers, the movement of the tide is not constant, rather its speed matches a bell shaped curve over the course of six hours. During each six hour tide cycle, the water level is moving slower closer to high and low tide (1/12th of the total height in the first and sixth hour), and speeds up at mid tide (3/12th of the total distance during both the third and fourth hour). The campers were eager to get involved with this piece that would soon become a fixture on their own beach, and to learn how tides work. As they get off the Provincetown II each day, the campers look over to the installation to check out where the tide is according to the orange rocks. 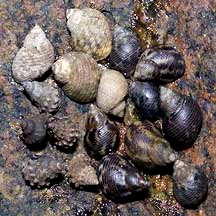 We were then ready to get started on our invasive species experiment. Since we are a part of the "Knowledge is Power" (KIP) station at CHV, we were able to supplement our regular marine education by getting the kids excited for the scientific work that they would be a part of during their summer at camp.To get them into the hands-on experiment that is removing two invasive species from the boxed in area, we first had to explain to them the broader topic of coastal sand erosion. As is very prevalent on Long Island, there are no longer sandy beaches around CHV. One attempt at bringing back the sand is to get algae to grow on the rocks there. By removing the Periwinkle snails that the kids are accustomed to seeing all over the intertidal zone in Boston Harbor, this predator will no longer feed on the algae that naturally occurs on the rocky shores to keep the sand on the beach. Along with the Periwinkle, the kids are also removing the Asian Shore Crab that competes with the green crab for space. We are hoping that by removing these invasive species, the sand will return to our 30ftx30ft square (marked off by more orange rocks). This experiment gets the kids engaged and the fact that it is relevant to them - and fun to look for crabs - allows them to continue to make collecting these species fun. Although we are not seeing any results yet, the kids keep checking during each of their KIP sessions to see if there is any improvement in the abundance of sand on their beaches. Halfway through our programming at CHV, we have gotten the kids not only to think about their impact on the environment, but the impact that these invasive species have as well. By educating them about the intertidal zone at their camp, they stay engaged and get excited about the prospect of sand returning to their beach and to figure out where the tide is in its twelve hour cycle. Until next time, -Kristen Barry