First Catch of the Summer 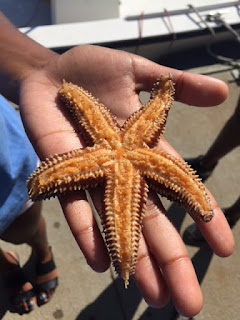 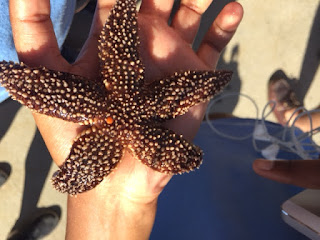 This Monday was my first time at Courageous Sailing Center and although I had bad start to my morning, by getting lost, my day ended good. I was lost for about an hour as I headed out to work Monday morning. I knew I was in the wrong place and with the help of my coworker, Andrea, I was guided to right area. It was pretty far from where I was but the view from the dock was cool. We pulled up two lobster traps and found lots of green crabs inside them along with a Forbes starfish! It had lots of spikes on its back and an orange dot. It didn't move much and the kids were interested in holding and touching it a lot. In the second crab trap we found another one but it was much smaller. 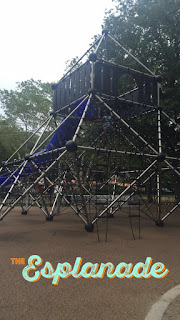 Later that day we went to community boating where we walked down to the lagoon with a group of kids to do some fishing. At community boating they had their own crab trap and inside there were two fish and an eel. They were sunfish and the eel got away before we were able to examine it. At the lagoon, we used worms as bait and not many of the rods had weights on them so we were not able to cast the lines very far, however, lots of people caught fish close to the shore. I remember the first kid who caught a fish, it made everyone excited to catch something including myself. Fishing requires lots of patience but if you know me, then you know that I have zero patience. Eventually I gave up because everyone was catching something except me. But thanks to Andrea I was able to catch a little sunfish! I was so happy to hold it but nervous at the same time. I hope to catch many more fish this summer. 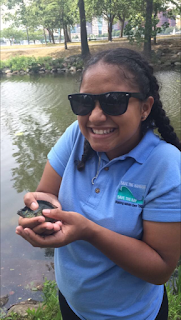