I am back once again. This week, All Access Boston Harbor is out on Georges island once again for the second time this summer. The first week at Georges was great because we did something very new that we had never done before. We caught some striped bass. This week though, it has been a little different. On Tuesday, we did not catch anything and fishing didn't really go as planned because everyone wanted to fish and there was just not enough time for everyone to fish. 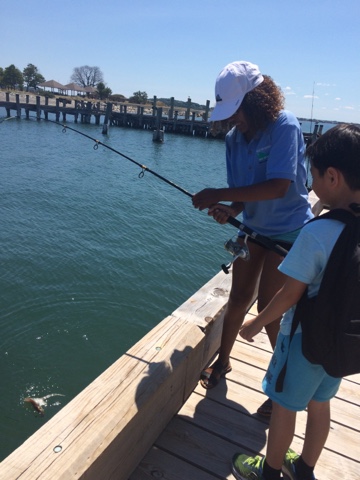 Tuesday was a little hectic but with the help of some of the JPAs, we were able to slow things down.
Yesterday (Wednesday) was our second day on the island. Fishing went really smooth because this time I made sure that it was more organized. I only let the groups who signed up for a time slot for fishing, fish and this time we had five different groups. I made fishing a first come first serve basis just to make it fair for every other group and myself as well so I wouldn't have a chaotic fishing moment. Many other groups that wanted to fish, could not fish because all time slots were already taken. When we got to Georges island, I casted a fishing rod which I call my especial rod and in five minutes I had already caught a skate. I was really excited to catch that skate because in all of my three summers working here, no one has ever caught a skate in Georges. It was not a fish but it was something cool and interesting for the kids. Unfortunately, the skate ended up escaping from the hook as I yelled out for a picture from Kharliya. Guess what though? It's cool because when I casted out one more rod, I ended up catching another skate and this time kids were around so I asked one of the kids to help me reel it in. We were able to bring the skate on to the dock when one of our JPAs whose name is Chris helped me take out the hook from its mouth. I was really shocked that we actually caught two skates out in Georges. We have not been lucky with the fishes at all but we have been very lucky with the skates every where we go. I am really looking forward into catching some more striped bass in Georges sometime tomorrow, next week or by the end of the summer. Fishing is becoming a hobby and I am loving it, especially knowing that I run fishing for All Access Boston Harbor. 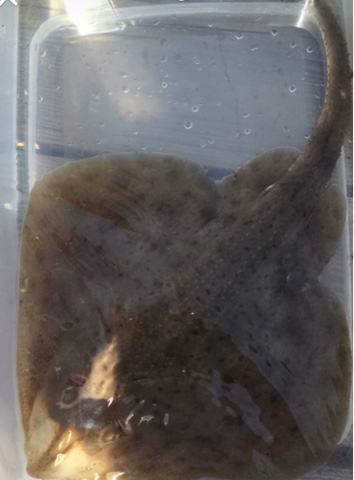