Yesterday was the most intense game of capture the flag, or C.T.F. as the kids like to call it. It was the jellyfish against the seahorses. The game was coming down to the wire...Sean and Amanda's team was in jail. They thought of this excellent idea to lay down on the ground and have each person grab the other person's ankle. It was Keira's idea, so that the line was longer so that their teammates could try to jail break them. It was such an amazing moment, that all the kids wanted a picture of it. So many little voices chanting, "Take a picture, take a picture." It was so cute. Paula wanted to get in the picture to make it look like she was breaking the kids out of jail. 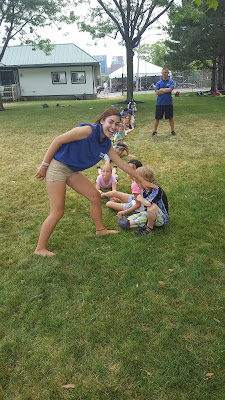 Today, while we were down on the dock, Christian asked if he could pull up the crab trap. Amanda said, "Yeah go ahead." When he pulled it up, there was a Rock Crab. Literally, with the one claw that it had, the crab held on to the rope with all its might in the world. Amanda and I really could not get the crab off the rope for a good five minutes. I held the rope, while Amanda tried to pull the crab off. The kids thought it was so cool. Desmond a.k.a. Superman asked, "Why won't the crab let go of the rope?" All Amanda and I could say was, "I don't know." Finally the crab released the rope and we were able to put it in the touch tank for the rest of the kids to see and enjoy. 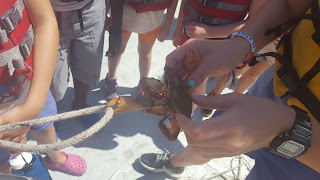 Til next time
-Ary