Greetings folks!
This past week at Save the Harbor Save the Bay was a blast! I learned, taught, saw, and held some new things I never had before! And that's what these programs are all about.

First, here I am ecstatic about having found a 6-armed starfish. 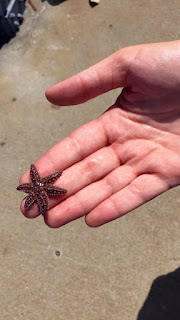 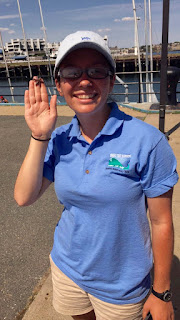 I mean come on folks, this defies the name of the creature itself! It's a STARfish because it has five arms, just as a star has five points. Yet Tuesday at Courageous Sailing in Charlestown, our group of kiddos revealed a six-armed starfish in the flesh. This was the chance for a couple of different firsts for me. Not only was it my first time touching a wild starfish, it was also my first time encountering or even hearing about one with six arms. This is a perfect example of the amazing things the beautiful harbor can do for people like me and the many kids in the Boston area. Any previous encounter of mine that involved a starfish also involved either an aquarium or a tank. While this may be naive of me, I didn't even realize starfish inhabited the Boston harbor.

I also had the pleasure of teaching some kids how to tell the difference between a male crab and a female crab. 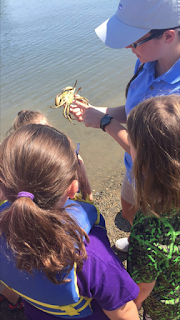 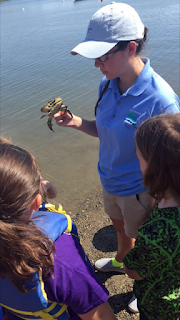 They all wanted to assume that the bigger crabs were all male while the smaller were female, when really, size does not always serve as an indication of gender. Instead, it is all about the shape present on the crab's belly. A straight triangle is present on a male's belly, while a more broad shape is present on the female's. Honestly, this is something I wasn't even aware of before the start of this position. Now I not only know this myself, but I get the pleasure of sharing this knowledge with kids who are very eager to learn.