One of my biggest goals this summer is to find a living sea star out on the Boston Harbor Islands. I had heard rumors of sightings from other colleagues who had gone out and seen some on George’s Islands. The weeks we have been out on George’s I’ve searched feverishly for the five-armed echinoderms, but have come up with no luck. You can imagine how envious I was when I found out the group at the Courageous pulled some up with their crab traps. 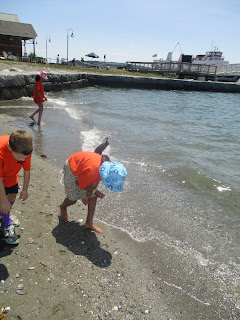 A large group of kids were exploring the water line on Thursday and I joined them in one of my favorite activates. As they looked for sea glass and crab claws, eagerly showing off their findings to their camp mates, and myself I was keeping my eye out for a star. While I was talking to one girl another girl came running but to me “Look what we found! What is it?” In her hand was a sea star! On closer inspection I saw that the sea star was not alive but was the endoskeleton of a sea star that was bleach white. Even though it wasn’t a live sea star it was the first evidence I have personally found of sea stars in Boston Harbor. The founders of the white sea stars promptly decided that the sea star skeleton was less interesting than the shiny, colorful sea glass and tossed it back into the sea. 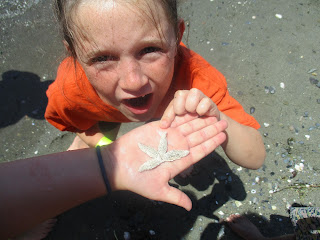 The hunt will have to continue for the elusive sea stars in two weeks when we return to George’s for the last time this summer. Hopefully this time the search will be more fruitful!