Yesterday was a perfect day to go out fishing in the harbor, and we did just that. Our bi-weekly fishing trip with the CHV fishing club got off to a slow start, but that does not mean that the excitement was lacking. We had a few returning campers that joined us on our last trip aboard the Belle, and that experience that they brought with them on the trip, allowed them to keep spirits up and made it so each and every one of us enjoyed ourselves.

As we motored out to the spot in the Harbor where we had the most luck last time, it was time for the staff to have their breakfast. I pulled out my bagel, and one of my coworkers pulled out a banana. Now I had never heard this superstition before, but it was a huge deal to Captain Charlie and he told her to throw it overboard. There are many different varieties to this story, but the one that is most widely accepted is the tale of bad bacteria being carried on a historical fishing boat that caused the entire crew to get sick. Nowadays, fishing boat captains are extremely careful not to have any bananas on board, and this can even spread to products that carry the word "banana" in their name. I felt silly having been fishing this whole summer without knowing such a widespread superstition about the sport, but of course now I know that you will never find me snacking on a banana near the harbor. 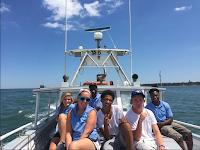 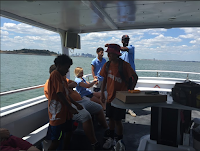 As we continued to look for good fishing spots, we dropped our lines and were getting a ton of bites my smaller fish. This got the campers from CHV pretty excited and we were able to reel in a few flounder for them to take home. Since it was a pretty slow day, our boat ride consisted of a lot more interaction with the kids whether that be in the form of chess, ice breaker games, or just telling jokes. Although we didn't get to take home as many fish as last time, our fishing club had a wonderful time during their day on the harbor.
Until next time,
-Kristen