Hey, it's me reporting back from a new site. I spent my day at the Children's Museum and got to meet new people that I have never worked with before. It was fun laughing and working with them. In the morning at the Children's Museum we caught some crabs and put them in the touch tank and showed little kids and even adults the crabs. The kids and adults got to touch the crabs and even hold them. The children that came over to see the crabs even got to name the little crabs. Some people were very scared to touch them but the children were fearless after touching one the first time. Towards 11 o'clock we CAUGHT A BIG FISH!!!!!! I have been working for STH/STB going on my second year and I have never seen anyone catch a big fish like we did on Friday. There was so much excitement on everyone's face even people just eating lunch on the boardwalk. We had a 17 year old named Chance from Alabama help us out with the fish. It was so big that we didn't have a touch tank to put it in so we had to let the fish go, which was sad. Later in the afternoon we only caught one crab and that crab was very angry that we caught him in the crab trap. We had one lady that was so excited to see that crab in the touch tank. I have never seen such a big smile on anyone's face. What a great day I had at the Children's Museum. 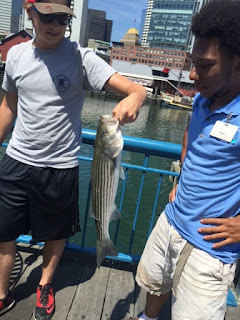