At Least we Caught Something 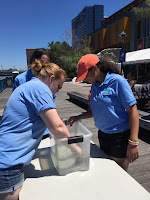 Our first day at Boston Children's Museum was a big hit! We started our day by teaching a young man named Braiden about how our crab trap worked. He was a bit nervous around the trap when I told him what we catch in there but as soon as we pulled up the first round of crabs and he loved it! Almost all the kids touched the crabs' backs and learned how to tell if the crabs were male or female. For a while I had the chance to talk to another young man named Johnathan who told me all about his favorite video games and television shows. He was excited to go into the museum but he was having so much fun fishing he didn't want to leave!

At one point we decided to get all the kids interacting with the crabs and decided to have a crab race. We drew a big circle and put the crabs in the middle of the circle and tried to see who could run out first! Some crabs got stage fright and stayed still and others were running for freedom like crazy!

Later in the day, we had a visit from some adults too. These four women came up to me asking about the program and what we were doing. One of them even asked to pull up the crab trap - there is no age limit to new experiences!

Our second day at the Children's Museum was one filled with fun and some technical difficulties. After a miscommunication about who was supposed to hold the rope to the bucket, our water bucket ended up floating in the channel. After trying (and failing) to fish for the rope attached to the end of the bucket we decided the net would be a better strategy. After tying a rope to the fishing net we had on hand we lowered the net into the water to scoop the lost bucket out. Several spectators enjoyed watching us trying to get ourselves out of the debacle we had found ourselves in. Luckily, we retrieved the bucket and continued on with our super fun day!